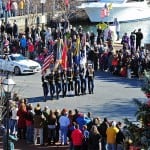 The 2014 Military Bowl presented by Northrop Grumman  promises to be as exciting as ever, with gameday events including a 5K race and parade featuring the Budweiser Clydesdales. Those events precede the highlight of the day: the matchup between teams from the Atlantic Coast Conference and the American Athletic Conference.

Tickets start at $20 and  are on sale now for the Saturday, Dec. 27 game at Navy-Marine Corps Memorial Stadium in Annapolis, Md.

Enjoy this yearâ€™s Military Bowl game without worrying about traffic or parking! We are partnering again this year with the Military Bowl to offer hourly shuttles starting at 9 a.m. from the three D.C. Official Bowl Hotels (listed below) to the Stadium. Return shuttle service will begin immediately after the game.

Click here to purchase your tickets for the 2014 Military Bowl

We are giving away 2 tickets for the shuttle to the game! No purchase necessary, just fill out form below: