Reston Limousine President and CEO Kristina Bouweiri recently joined the U.S. delegation of 71 participants at the 25th Anniversary of the Global Summit of Women, sharing in the experiences of women entrepreneurs  dedicated to increasing women’s economic empowerment globally. Bouweiri has been representing the United States at the summit since 2010 and has been a panelist at the 2010-12 forums.

Kicking off the summit were young entrepreneurs who expressed their wishes for change 25 years from now; the speakers including a 19-year-old inventor, Raissa Muller. Muller became a Summit ‘star’ presenter when she introduced her invention of a sponge to clean up dirty oil from waterways to Summit delegates, who came away impressed with her poised delivery, smarts and creativity. 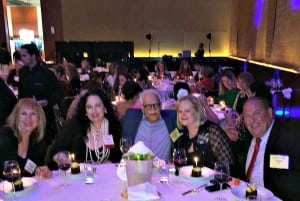 “It was thrilling to once again join hundreds of other women entrepreneurs and share their experiences in empowering women in their countries,” Bouweiri said. “This annual summit is so important in pushing this topic to the forefront of government and corporate agendas.”

One thousand women leaders in business and government from 63 countries converged in Sao Paulo, Brazil,  from May 14-16 to connect with one another under the theme of “Creative Women – Creative Economies.”

“The diverse group of leaders who joined the Summit this year, as well as the past quarter-century, created a magical atmosphere in which we all are going home with new ideas, new contacts, and more energy to continue to work to improve the economic lives women around the world,” Summit President Irene Natividad said in a press release.  In the release, she pointed out to delegates that a change of perspective regarding women – a shift from seeing them as economically vulnerable to viewing them as economically valuable – is needed to reflect the reality of women’s economic clout as half of the world’s workers, as the majority of its consumers, and as the dynamic engine behind small business growth.

Julie Katzman, Executive Vice President of the InterAmerican Development Bank, echoed this sentiment, when she pointed out that women represent a $13 trillion market, much bigger than China’s.  This ‘business case’ for gender equity was reiterated throughout the Summit’s program.

During a ministerial roundtable, Brazil’s Minister of Policies for Women Eleonora Menicucci shared her country’s efforts to accelerate women’s economic progress, and ministers from France, Poland and China also shared best practices. At the end of the presentation, ministers from United Arab Emirates, Philippines and South Africa pledged to adopt a percentage target for contracts issued by their ministries.

Upon review of the public-private sector projects presented at the roundtable, summit organizers presented its Ministerial Award to Malaysia’s Minister for Women, Family, and Community Development Dato’ Sri Rohani Abdul Karim for the ministry’s Career Comeback Program.  This project encourages women workers who left employment for family reasons to return to the workforce through training, networking and subsidies to employers who rehire these returnees – a replicable project in developed and emerging economies.

Other awards presented at the summit included Lifetime Achievement Awards to: 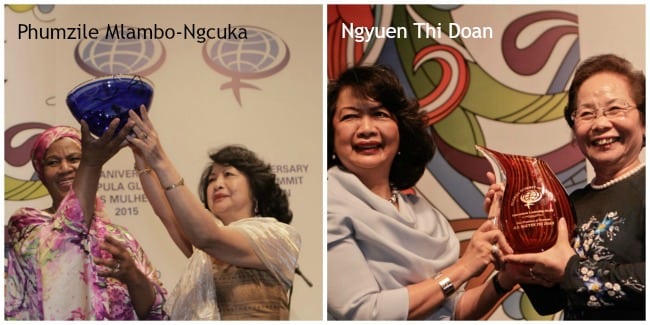 Other summit presentations included the release of the 23rd and most recent study on women on corporate boards; the study was conducted by Corporate Women Directors International, the research arm of the Global Summit of Women.

According to the study, women account for 19.2% of directors on the boards of the largest U.S. companies, compared to 20% in Europe, 9.4% in Asia-Pacific, and a dismal 6.4% in Latin America.

The dearth of women board directors in Latin America triggered a spirited discussion at the summit plenary session on “Creative Strategies for Women-on-Board Initiatives.”  At the session, government leaders shared that quotas have been implemented in France and German to speed up women’s access to board appointments.