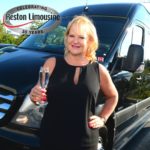 As Reston Limousine celebrates 30 years in business as the Washington DC metro region’s premier limousine and shuttle bus company, we thought we’d share some of the professional advice that President and CEO Kristina Bouweiri has offered over the years. Kristina has been a mentor to hundreds of women business owners and professionals through personal contacts as well as the monthly networking group she founded more than 10 years ago, Sterling Women. She also has been a regular coach attendee at Washington Business Journal’s annual Bizwomen Mentoring Mondays.

In an interview with Inkandescent Women, Kristina shared her experience when a light bulb went off on a new service – scavenger hunts as team building exercises – that she began offering almost 20 years ago.

After Sept. 11 business came to a screeching halt.

“Americans were afraid to travel, and that meant they didn’t need limos to take them around Washington,” she explains. “It was very scary.” 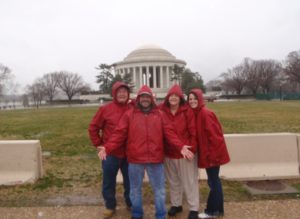 In 2011, Reston Limousine staff split into teams for a scavenger hunt that would serve as the template for a new team building service created by CEO Kristina Bouweiri.

Always one to make the best of a situation, she got creative. As a result, the business downturn proved to be the perfect time to turn around her leadership approach.Kristina began reading management books, oined several professional business groups and attended luncheons where successful business people described how they led their firms.

“I heard them talk about playing games to team build, and a light bulb went off,” she recalls. “It’s not that I didn’t know about the benefits of team building— dozens of companies used our limos and vans to transport their own employees to nights out on the town or other adventures. It just never dawned on me that it was so critical.”

She decided to give it a whirl and organized a scavenger hunt.

“We divided the staff into six teams and each group took a limousine into Washington, D.C. They had to fill a small bottle with water from the Reflecting Pool and buy a gift from Ford’s Theater, among other tasks.”

Then she treated employees to a company picnic near the Washington Monument. The experience did wonders**and not just for the staff.

“The outing made me realize that having fun was truly the key to success,” says the CEO who now plays on the company softball team and sponsors Survivor parties for her staff. “I learned that if you invest in making your employees happy, it comes back 100 times.”

Do you want to connect with Kristina? You can follow her on: