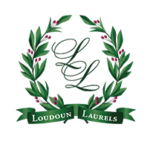 Reston Limousine President and CEO Kristina Bouweiri recently was inducted into the Loudoun Laurels, joining a coterie of esteemed Loudoun County citizens who have been recognized for substantial years of community stewardship. Bouweiri and another longtime civic volunteer, Di Cook, officially became laureates at a gala ceremony Sept. 27 at Belmont Country Club in Leesburg. They join 22 other residents who have met the program’s standards of “selflessness, integrity, creativity, wisdom and courage.”

“It is our honor to present the medal as a symbol of our respect and appreciation for your commitment to stewardship, your service to LC and for a lifetime of leadership by example,” Loudoun Laurels Foundation Board Vice Chairman Cate Magennis Wyatt said during the presentation.

“Thank you from the bottom of my heart for this honor tonight. I am touched beyond words,” Bouweiri said. 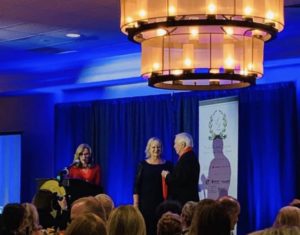 Since establishing headquarters in Sterling in 1994 and building her home in Lesburg in 2000, Bouweiri has supported the broader community through her contributions to the Loudoun economy, leadership of philanthropic initiatives, and expansive volunteer and vocational service.  Her corporate philanthropic efforts started with donations of limousines to sick children through the Children’s Inn at NIH and the Make-A-Wish Foundation, and grew from there. “When you start giving and you see how it makes you feel, you just want to give more,” Bouweiri said.

Through Reston Limousine, Bouweiri has donated more than $1.5 million in in-kind services to charitable organizations. Other notable efforts are the donation of more than $200,000 to Loudoun County charities through Sterling Women and more than $800,000 donated through her “Wine, Cheese, and Chocolate” and “Partini” events. Through her leadership and membership in community organizations such as the Loudoun CEO Cabinet, Inova Loudoun Hospital Foundation and Loudoun Education Foundation, she also has helped raise more than $500,000 for charities and nonprofits in the county.

In addition to the annual awards program, the Loudoun Laurels program offers mentorships and provides scholarships of up to $10,000 per year to select high school seniors for tuition and fees during their four-year term at an accredited college or university in Virginia.

For more information about the program, visit www.loudounlaurels.org.