By now, hopefully, you’ve been following along with Reston Limousine as we go on our #FunFriday tours.  After staying fairly local for the previous trips, we decided in the sweltering heat of a typical Virginia summer day to venture down to Doswell, Virginia. This is home to one of the best amusement parks around, Kings Dominion, which if you haven’t been I would highly recommend you do so sometime soon. For the majority of you who have been to this thrill-seekers paradise, you know just how exhilarating of a place it can be.

So, we set off on our trip to Kings Dominion with swim suits in hand somehow avoiding what could have been horrendous traffic.  After making a short stop to buy a quick meal, we arrived around noon.  Surprisingly, the line to get into the park wasn’t terribly long, and soon we were inside ready to ride every ride possible before leaving. We went straight for a cabana in Soak City to keep personal belongings that we didn’t want to lug around all day and to use as a meeting point for later in the day. 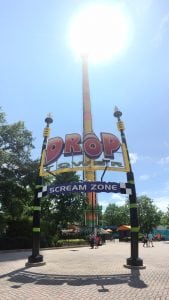 On a normal weekday, the lines are pretty short, there aren’t too many people in the park, and riding all the rides is an easy task to accomplish.  On the weekend, however, this becomes more difficult as the number of people increases significantly, making lines and wait times longer for everyone.  That is unless you buy a Fast Lane pass, which helps you cut the lines for most of the rides. Just be sure not to take too personally the hateful glares that you will inevitably receive throughout the day. With that in mind, you can go in a circle either clockwise or counterclockwise around the park, you can go straight to the back and make your way forward throughout the day, you can start at the front and make your way to the back, you can head out with no particular plan, or you can do what we did and start at Soak City and go out from there.

We headed for the

Grizzly as our first ride, which for those interested is a great starting point as you won’t have a possible headache by then and the lines are nonexistent. For my riding buddy, Sierra, all the rides were somewhat new to her as she hadn’t been to the park in quite some time. But for me and all the experience I had coming to Kings Dominion at least once every summer for the past 11 years, I knew the park and all the rides like it were a second home.  All the bumps, all the turns, all the hills, they were all so familiar.

Now if you’re anything like me, the very first ride is always the most nerve-racking. I don’t know if it’s because I haven’t been on one in awhile, or if I’m just not used to the feeling of dropping down a steep hill extremely fast in my day-to-day life, but the first drop makes me feel like my stomach is in my chest making it nearly impossible to scream. Once the first ride is over with, however, it’s smooth sailing from there.

With one ride down and only just beginning, we made our way to Blue Ridge Tollway to ease some of my nostalgic thoughts of when I was much younger and driving a vehicle was more exciting than it is today. After reliving my childhood memories, we hopped on Rebel Yell, the new ride Delirium, and Drop Tower. For me, there are very few things I enjoy more than the feeling of weightlessness as you fall down 305 feet. This was a perfect follow-up to the Delirium, which was quite relaxing and not so much scary or tumultuous like I was expecting. 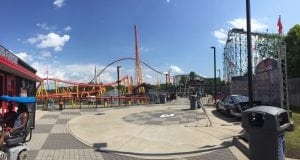 Being a little less than half way done with the rides worth riding, in my opinion, and being the hottest part of the day, Sierra and I made our way back to Soak City to get off our feet, to cool off in one of their wave pools, to hydrate and to grab a bite to eat.  Two hours later, an ominous looking cloud appeared out of nowhere, temporarily shutting down the park’s rides and pools. With enough rest and my feet finally OK to walk on again (because I wasn’t smart enough to think that wearing new sandals trying to break them in would be a bad idea), we headed back out toward the Intimidator and Flight of Fear. 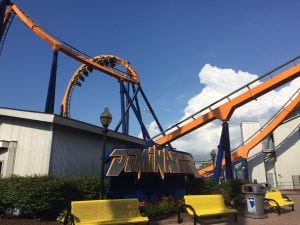 Though all the rides were still on pause when we got to the Flight of Fear, it helped keep the lines very short.  From the Flight of Fear, to my favorite ride in the park – the Intimidator -to the Anaconda and taking a video on the ride itself, to the Backlot Stunt Coaster, and finally to the Dominator, the day at Kings Dominion was a success. If anyone back at home is keeping track that does leave the Hurler, the Volcano, the Crypt, and WindSeeker unridden.

The Hurler is currently closed for renovations for the summer; the Volcano was up and running for a short time, but it ended up closing for the day; the Crypt was not something I felt like riding that day; and WindSeeker, which doesn’t appeal to my thrill-seeking persona as much as some of the other rides.  Not to say that the Crypt and WindSeeker aren’t good rides, they’re just not my favorite in the park.

So if you want to make a day trip out of Kings Dominion with your family and friends, click below and schedule a trip of your own. We have vehicles ranging in size from sedans to motorcoaches and can accommodate any size group. Booking your vehicle is as easy as 1-2-3! 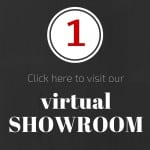 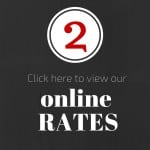 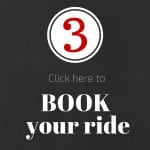