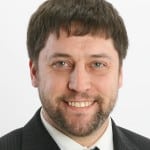 “Joe’s experience and extensive skillsets have enabled us to place him in a variety of positions in several departments, and we will be leveraging his talents as we update and enhance technologies in safety and training,” President and CEO Kristina Bouweiri said.

Swetnam will oversee Reston Limousine’s safety, compliance and training programs. Prior to joining the company in 2013, he managed these programs for a smaller local operator for seven years. While at Reston Limousine, he has trained in dispatch, supervised shuttle operations, and solved IT challenges. In his new role, Swetnam is introducing and continuing technology initiatives, including managing the use of a new fleet management system implemented earlier this year, going paperless and transitioning to electronic forms, and offering online video training for new and current drivers.

Swetnam’s promotion, effective Sept. 1, comes as longtime Safety and Training Manager Keith Johnson has transitioned to his new role as a transportation management consultant with BUS Advisors. Johnson, who joined Reston Limousine in 2009, has worked in the transportation industry since 1988 and focused on safety and compliance management since 1992. During his years of tenure, Reston Limousine has successfully passed six full audits by the Department of Transportation and Department of Defense with no penalties assessed.

Johnson will remain working as a consultant with Reston Limousine, managing the company’s driver background checks as well as the drug and alcohol testing program. “Reston Limousine safety and training has become recognized as one of the industry’s pre-eminent programs and will continue as such, under Keith’s guidance with Bus Advisors,” COO Tony Simon said.

“We greatly appreciate Keith’s contributions to Reston Limousine over the years, and we’re thankful for his continued partnership while we look forward to Joe building upon his legacy,” Bouweiri said.